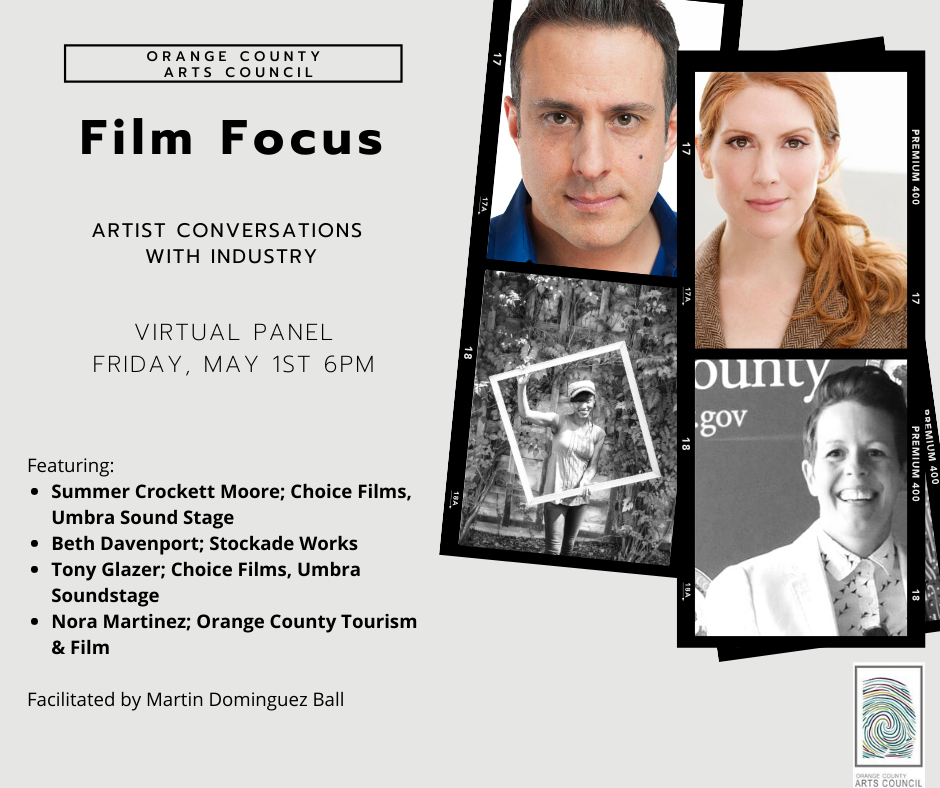 Film Focus – Artist Conversations with Industry. This month features a virtual panel discussion of professionals in the Film Industry hosted on Zoom.

This online event is free, but donations are graciously accepted.

Learn about challenges and solutions currently facing the Film Industry. Hear about opportunities to get involved. Find out how your location might be able to participate as a filming-site. Participate in Q&A facilitated by Martin Dominguez Ball.

Registration is required to join us in this exciting Zoom Panel. An e-mail with login instructions will be e-mailed to you upon your registration.

Born in Montevideo, Uruguay, Martin Dominguez Ball moved to New York in the mid-1980s. He is a multidisciplinary artist with a BFA in graphic design and a MFA in interdisciplinary arts. A prolific creator, Martin’s paintings, drawings and sculptures have been well received in galleries in New York City and beyond. Additionally, he is a a filmmaker, musician, the founder of O Street Design, and a professor at Fordham University and St. John’s University.

Beth is a transmedia strategist and storyteller with over fifteen years of experience in non-profits, documentary film, commercial production, post, and digital strategy. Her passion is using media and technology to create a positive impact on society. Beth has led departments, launched digital platforms, and has implemented crowdsourcing and audience engagement campaigns. She has directed and produced documentary films and commercials for BBC, Sundance Channel, PBS, NBC, Arte France, among others. Beth is the Co-Founder/Director Programs of Stockade Works, a non-profit established in 2016 to further the potential of film, media, and technology in Hudson Valley, NY, and Upriver Studios, a women-owned and led, sustainable soundstage and post production complex being developed in Saugerties, NY.

Summer Crockett Moore is an award-winning actress/producer and a Managing Partner and founding member of Choice Films Inc. and Choice Theatricals. As a producer, she has helmed award-winning independent feature length and short ﬁlms, Off-Broadway and Regional theater productions, and chaired an annual Celebrity Awards Gala Saluting NY Theatre and Film. Additionally, Summer served as a Showrunner and Line Producer for the upcoming (2020) television series Big Dogs. Feature Film projects include: The Winter House (2020) Trick (2019), The Scottish Play (2019), Beauty Mark (2018), Above All Things (2016), After the Sun Fell (2017), Lez Bomb (2018), Lost Cat Corona (2016), Dead Sound (2019), Junction (2013), Heather (2017), Wholly Broken (2017). Short Films include: Trust Me I’m A Lifeguard, These Things We Hold, Mired, Symposium, A Younger Man. TV Projects: Big Dogs (2020), Vevo’s One Night Only (2016). Development projects include: Visiting Day, Things We Hold, American Stare, Miss Liberty, Private Woods and Best Death Ever. Theatre projects include the Off-Broadway world premieres of Scrambled Eggs, Reading Under the Influence, Stain, In the Daylight, and Tune In, as well as revivals of Playing with Fire and Five Women Wearing The Same Dress, and the regional / world premiere of the new plays, Between the Lines, and American Stare.

Summer can be seen and heard in various national and international television and radio commercial spots (over 650 in her commercial career) as well as in recurring roles in television shows and in feature films. She also voices multiple characters in several cartoon series. For a full list of her credits & awards find her on IMDB, or visit: www.summercrockettmoore.com

Tony Glazer is an award-winning writer/director/producer and a Managing Partner of Choice Films Inc. and Choice Theatricals. Tony’s plays have been produced in New York, New Jersey, Los Angeles, Chicago, Philadelphia, England and Canada. His feature film credits include Dead Sound (Producer/Director) Trick (Production Supervisor) The Scottish Play (Producer) Lost Cat Corona (Producer), After the Sun Fell (Producer/Director), Heather (Producer) Above All Things (Consulting Producer) and Junction, which he wrote, directed, and which won 17 major film festival awards around the country before a national and international theatrical release (int’l title Hostage). Tony was the Director of the short film Trust Me I’m a Lifeguard which premiered at the 2014 TriBeCa Film Festival and of the multi-award winning short, Mired which toured the festival circuit in 2016. Projects currently in development include: Visiting Day, Things We Hold, American Stare, Miss Liberty. Tony was an Executive Producer, Showrunner and Co-Writer on the upcoming television series, Big Dogs.

Glazer’s stage plays include Stain Safe and The Substance of Bliss (published by Samuel French), American Stare, In The Daylight, Reading Under the Influence and What Friends Are For. Glazer’s short play Lines has also been published in the Best 10-Minute Plays 2012 edition, The Substance of Bliss won the L. Arnold Weissberger Award at The Williamstown Theatre Festival. Recent television directing credits include episodes on the shows REDRUM and A CRIME TO REMEMBER. Tony received his BFA in Acting from Boston University and studied acting with Maggie Flanigan. He is a member of SAG/AFTRA, DGA and WGAE. Find Tony online at: www.tonyglazer.com

Choice Films is a multi-award-winning full-service production company that has been producing film, television, regional and Off-Broadway theatre, multi-media/web projects and live events since 2001. With offices in NYC, NJ and Newburgh, NY #TeamChoice works from development thru delivery for a variety of clients on many budget levels. For more info visit: www.choicefilms.com

UMBRA OF NEWBURGH SOUND STAGES – UMBRA of Newburgh is a state of the art NYS Qualified Soundstage within the 40% tax credit approved zone (for both production and post-production). We are a turn-key facility with a 16,000 square foot soundstage, and a 20,000 square foot soundstage, both with 21-foot ceilings and a fully installed grid for versatile lighting needs. We have a large catering area (seats 150) with prep kitchen and buffet serving area with a wing of crew bathrooms attached. We have 8 talent dressing rooms, with private talent bathrooms and showers. We have a 1500 square foot wardrobe and costume shop with onsite laundry facility, a 6000 square foot scenic construction shop, and 5500 square feet of production office spaces and conference rooms. We have state of the art 24/7 camera on site security (both interior and exterior) and free parking for up to 60 vehicles. Our stage is set up for cars to drive directly onto the stage for enhanced environment vehicle shoots, and we have 4 loading bays for easy load in and load outs. Our in-house vendor for grip/electric/expendables is The Lighthouse Inc. and all camera needs are serviced by our camera partner VER Camera. Full production services are also available. www.umbranewburgh.com