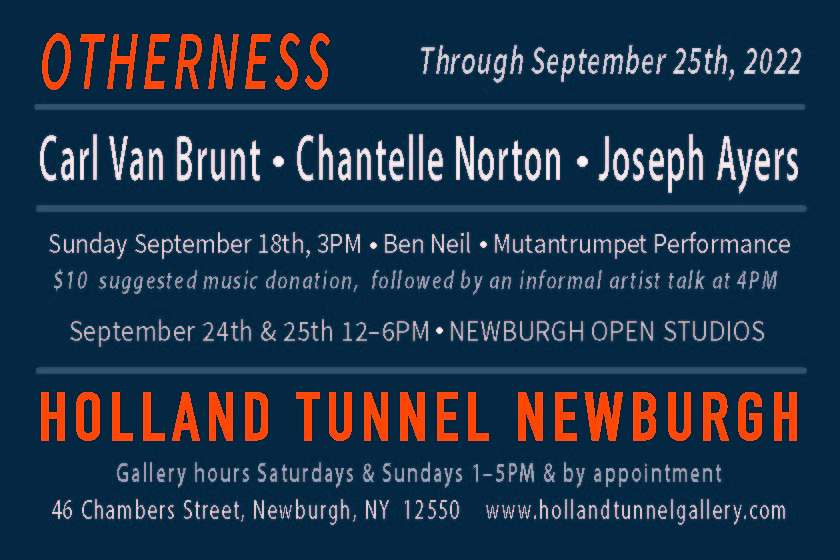 For Otherness Chantelle Norton, Carl Van Brunt and Joseph Ayers weave together an eclectic array of combined media, approaches and subjects. Sharing interests in time, history, myth and phenomenology, each artist explores notions of one’s ‘self’ in relation to the ‘other’.

Chantelle Norton reinterprets the myth of medusa through ceramic plates and wallpaper designed with hand-made drawings. Norton said of her approach “my idea to incorporate ceramic plates came from thinking about stoneware and Medusa’s power turning men to stone, and Athena’s circular shield with an image of Medusa’s head”. The wall paper patterns that Norton creates retell this ancient myth, and reexamine the story in a modern context. Medusa was a rape victim who was punished and beheaded. Her head became an iconic symbol used in both domestic and public spaces throughout the ancient world.

Carl Van Brunt continues to push the boundaries between notions of the self in the face of the emergence of AI. Using hand made drawings and sketches as well as digital sources such as fractal and 3-D renders, Van Brunt uses AI technology to transform these into seemingly infinite permutations. Combining video, animation, analogue drawings, and prints, Van Brunt draws on the spiritual self, past and present, as a way of tapping into the future alter-ego of AI.

Joseph Ayers uses a combination of traditional media, new technology, video, sound, and sculpture to explore both connections and disparity between physical and psychological perceptions. For Otherness Ayers will present a meta-cluster of drawings and paintings, and a pairing of sculptures that can on the one hand be seen with the eyes, juxtaposed with video-sculptures that can only be felt with the hands. Ayers has said, “as a multimedia artist I think a lot about appearances and perceptions, and how relationships between these two things influence, and to some degree, have authority over, everything we experience.”