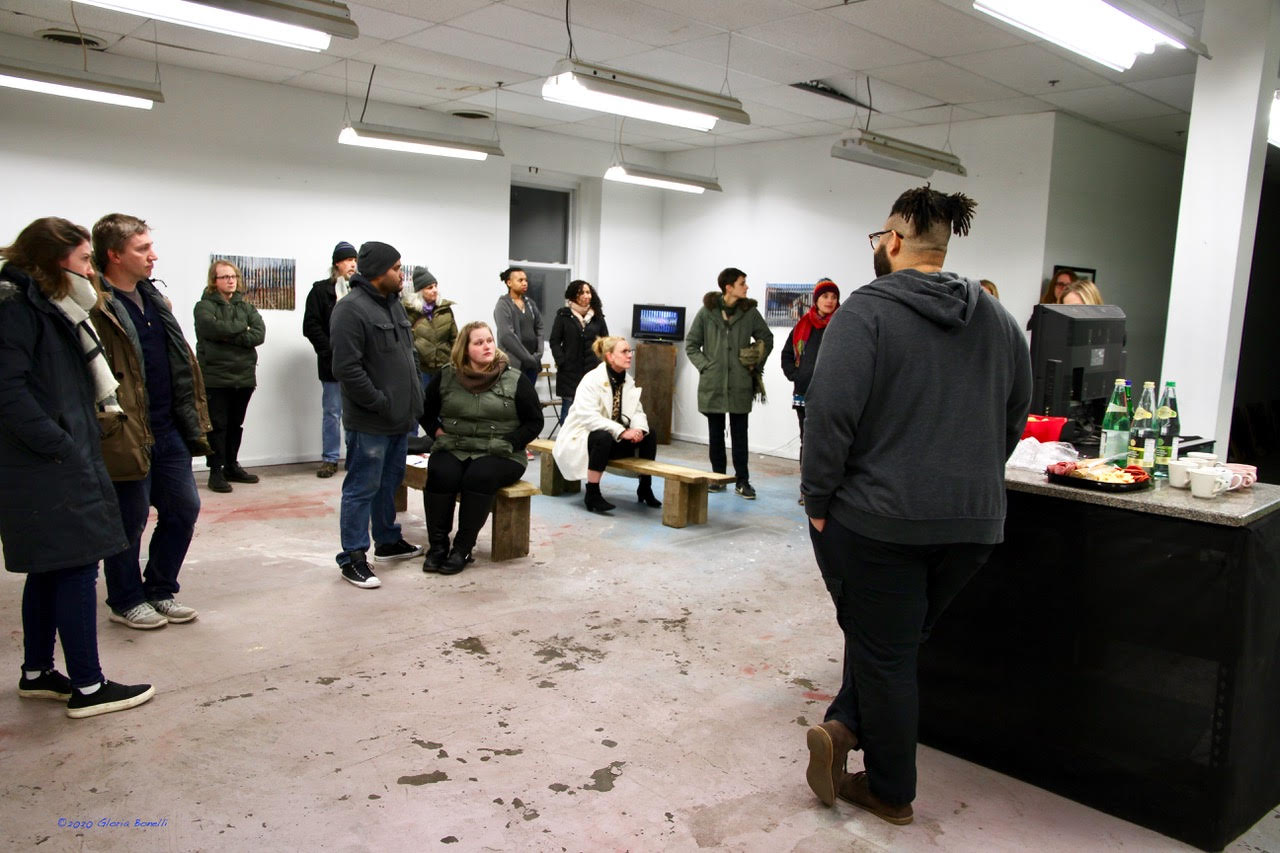 On Thursday, January 20, 2020, Orange County Arts Council visited the Newburgh studio of conceptual artist Vernon Byron. His work, through video, photography and sculpture, is an exploration of the intersection between matter, energy, space/time and society and how these fundamental aspects of reality shape the human experience.

A native of Spring Valley, NY, Vernon sees Newburgh as a place with beauty and joy amid the seeming hopelessness that weaves through some of its streets. His studio, located in a former factory building on Water Street facing the Hudson River, serves as an incubator to launch his latest works.

On the white walls of his studio hang his latest exhibition, “Vanishing Points,” centered around the perception of Newburgh as a “war zone.” This series of lenticular photographs offers changing perspectives of the subject he presents. Vernon photographs working-class people, against a green screen. After asking them about their favorite locations in the city, he visits these places and documents them using his smartphone. After manipulating the images in Photoshop, he scores and folds the printed images in order to isolate each section of the image, creating contrasting urban environments where the subjects are later inserted. What results is a vibrant combination of colorful images in an abstract landscape that resolves as the viewer moves around the work.

“This project was inspired by the social implications of visibility and invisibility,” says Vernon. “Visually speaking, the vanishing point is a point in which a distant object disappears from view, as it moves beyond the plane of the horizon.” 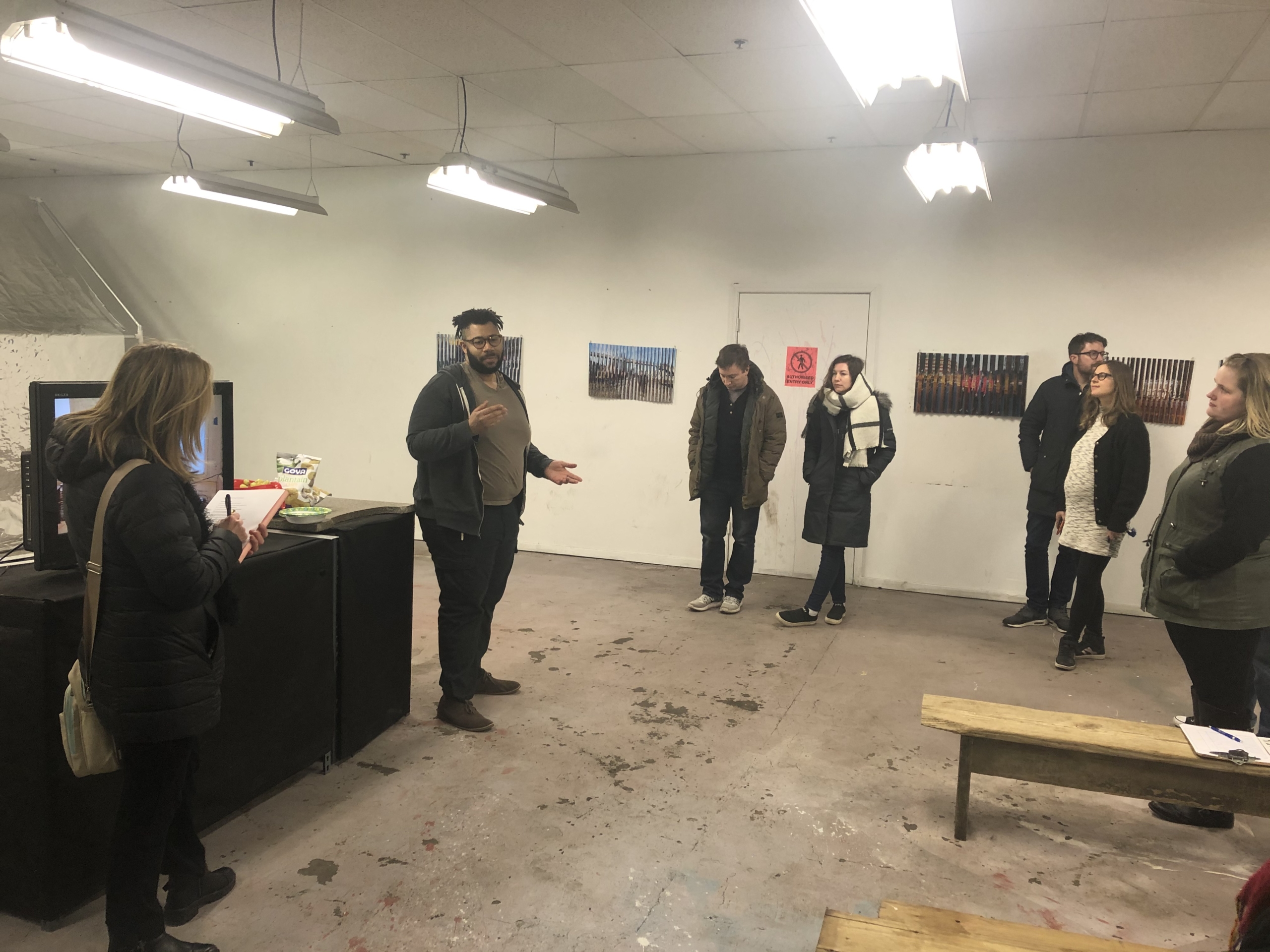 He points to his pieces lining the walls of the room. “Vanishing Points” is a metaphor for the growing divide between social classes in America. Every day, working class people are being pushed further away from safety, security, and vital resources. Yet, as the struggle of working class people intensifies on a personal level, it becomes an increasingly distant concern at the national level. Despite this struggle on a daily basis, it eventually becomes ubiquitous and undetectable. This work is about perceiving and questioning that distance and how it shapes the image of our communities.”

Also on display is a video of an installation that took place in the autumn of 2019 showing a Newburgh house whose front porch was wrapped in camouflage netting. Vernon created this work as a statement depicting the elusiveness of home ownership in the present housing market.

“The netting obscures and blurs away the front of the house from the sidewalk to the roofline,” says Vernon. “By optically distorting the first story of the home, the work alludes to the blurring associated with physical distance while the aesthetic association surrounding camouflage refers to the war being waged on the working class materially and ideologically.”

At an early age, Vernon began to draw, which inspired him to take in the world around him. Eventually, he took up printmaking. Through that experience he fell in love with the artistic process. Watching an idea transform from inspiration into a finished piece is what keeps him moving forward with his career.

Though he works full time as a security guard at Beacon’s Dia Foundation, he takes notes as ideas come to him. Inspiration comes from a variety of sources, but Vernon is drawn to light and space, and by other artists who work with these themes. Carving out time to pursue his art is precious, and he devotes all of his remaining hours away from Dia to express what lies within his soul.

When asked what’s next for his creative output, Vernon replies, “I’m thinking about vertical axis and how it could be realized using video and augmented reality. And, of course having my work displayed at the Guggenheim.”

Vernon Byron’s work, “Vanishing Points” is made possible in part by a community grant from the Orange County Arts Council.